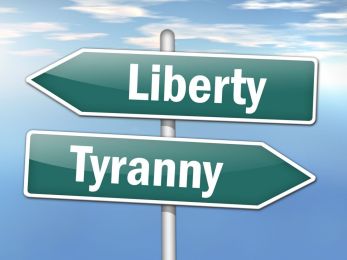 polarize |ˈpōləˌrīz|
verb
divide or cause to divide into two sharply contrasting groups or sets of opinions or beliefs: [ no obj. ] : the cultural sphere has polarized into two competing ideological positions

With polarization there is no middle ground where two sides can come together and coexist in harmony. Sometimes we do it to ourselves; often it is caused by others who have way too much influence over us. It leads to hatred. It’s the root of all wars, all divorces, all bitter ex-friendships, and so on. Nothing good comes from polarization among humans. Unless we go our separate ways and have no contact with the enemy…then we can remain relatively in peace, while being conscious of the need to be separate, to not communicate with “them,” lest things get violent or even deadly.

I remember in decades past how people could disagree strongly on important issues and still remain friendly, by being civil and relatively respectful, even while teasing and ribbing the other party about just how “wrong” they were. It seems that’s pretty much gone today, and I think that is deliberate. Certain interests need society to be bitterly at each others’ throats, impossibly disconnected in their views on what is right or wrong. Unable to communicate without things becoming very ugly. Total alienation.

We’ve all heard of “divide and conquer” as a means of taking control of people by weakening their camaraderie and eventually destroying it. With a united front of billions, nobody could strip away our freedoms, our rights to live as we choose, to go about our lives without Big Brother’s smothering “thumb” squashing us down. So we must be pitted against each other, fighting amongst ourselves, thereby allowing “them” to slither into power while everyone is so miserably distracted.

Haughty, aggressive virtue signalers and snitches are huge in this sort of world…people who eagerly enforce draconian “laws” for their puppet masters. These self-proclaimed masters are the mega-wealthy power mongers who feel it their duty and their right to control billions of other people and require them to do things they do not want to do, for their own good, of course. We’re children, you see, who don’t know what’s good for us, and the Elite crowd are there to fill that void.

But the real goal here is a socialist world government where everyone (outside the ruling elites) are equal…and equally miserable and humiliated, or worse. As long as the people don’t revolt en masse and take back their lives as their own. Which they usually do, eventually.

The following video shows the real purpose behind the “coronavirus pandemic” and racial polarization currently foisted on us all in daily barrages of “news” reporting and other mainstream media programming. [Note: I believe Trump was shaking Klaus Schwab’s hand (pictured in video) to be polite, not in any sort of agreement with him, and this was back before January 2020]:

How better to attain worldwide Marxist socialism than to polarize the masses against each other, to have a large faction of society enforcing your rules for you? Millions of henchmen and women. All it takes is—FEAR of harm or death—whether it be from a “mysterious deadly virus” capable of destroying economies and entire ways of life, and/or from “whole police forces intent on doing away with ‘your people’ at the behest of evil leaders in power voted in by people who hate you.” Etcetera. Truth be damned in these scenarios. Honesty and ethics have no place in massive power grabs.

Those grabbing massive power for themselves are the real enemies here. They are who need to be entirely stripped of their power and even of their liberties, as they’ve seriously abused them to crush the liberties of others. Certain people everywhere have got to realize this, and stop kowtowing to them. Stop being such willing puppets for people who don’t give one damn whether you live or die or how miserable you are under their coming absolute tyranny. All you are to them are “useful idiots.” You know who you are. And yes, you are the archenemy of decent people everywhere.

View all posts by Laura

4 thoughts on “Polarization as the Road to Worldwide Socialist Tyranny”

This site uses Akismet to reduce spam. Learn how your comment data is processed.

© 2012–2021 Blame it on Love | Laura | a WordPress blog. Unauthorized duplication of author’s written material as full articles, not appropriately attributed, is prohibited. Excerpts and author’s own images may be used if appropriate credit is given linking to this site.